Hopefully you were not in the same situation I was in 2007. My Epson 4000 printer suddenly showed a bad case of deflected nozzles in the matte black channel. After the routine cleaning attempts, including the “Windex” pool under the parking head method, I had to have the printer checked by an Epson-certified repair shop. They concluded that the printhead needed to be changed, which would have cost between $700-900. As you can see from the images of the automatic ink check routine below, the effect of the deflected nozzles can be seen as gaps in the printed ink rectangles. What is clear is that the matte black, as well as the magenta inks, are the most likely to create troubles because of the larger carbon pigment particles that are present in the former. The magenta and yellow inks also dry easily and are the next likeliest inks to give troubles. 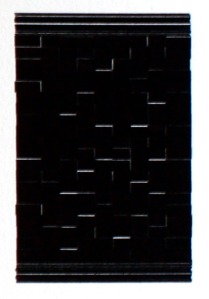 More discussion on this problem can be found here, but here is a summary:

In the end, after my many cleaning attempts, what worked best for all but the matte black channels came from advice I received from a professional printer: To unclog the nozzles, his trick is to park the head on top of an absorbing pad of lint-free material (Trader Joe’s sells a lint-free cleaning viscose pad that works great for this). I cut a 2×3 inch piece and placed it over a larger double layer of Saran foil to stop any ink from leaking to the rollers. Then, slowly move the head from left to right to cover the pad until you see a piece of pad on the left edge of the head. By parking the head over the pad overnight, a good amount of ink will seep through the nozzles, keeping them wet and dissolving most of the troublesome deposits. You may need to do this for up to 5-7 days, changing the pad every day. The head can be parked off the middle of the carriage without problem. If you don’t know how to unlock it, there is a lever near the top front of the head, next to the cutting blade; it needs to be slightly depressed to free the head. To find the lever, you will need to go under the plastic cover to the right of the rail system to find it. Don’t worry, nothing will bite you!

I hope this trick will help you if you are in the same situation:  I ended up doing exhibition prints on Epson Luster paper after this procedure. On the other hand, I was never able to recover the matte black channel, which I had seldom use for at the time. The 4000 and 4800 series of printers (as well as the all the larger series like the 9800) are very susceptible to clogging if the printer is not used regularly. Some professionals advise to print an Letter-size sheet every day.