I am a freelance photographer specializing in travel photography.

Unfortunately, I just had another occurrence of a dead printhead with my Epson 3880, which manifested itself in an identical way to that of my Epson 3800 about 4 years ago.

While I decided to trash the previous 3800 printer by sending it to an electronics recycling company, this time I decided to get it repaired. I knew that changing the printhead would cost about $500, so I thought it would be worth going this route…

Not so fast! The Epson recommended repair shop first replaced the pump assembly, which together with labor, cost $240. I thought that it was the end of the story and was happy to end this with a rather inexpensive repair. Unfortunately, as soon as I brought the printer back home, it was showing the same leak symptoms (leaky Photo Black nozzles, emptying the PK cartridge in less than a day simply in standby mode !!) I brought it back to the repair shop, which acknowledged that the problem was not as simple as initially thought (duh). On my side, I knew all along that the nozzles were irreparably damaged, and yes, they admitted that a new printhead had to be ordered. I went along, but soon regretted going through the whole thing because the total for replacing the printhead was not only $463 (without labor, which they gave for free), but I had to give them several new ink tanks at my cost to refill the lines and printhead. Overall, the total cost was $1,110. A new printer as of 8/7/2014 is $1,129, but there is a $200 Epson rebate for this printer right now!

Clearly, this shows that it makes absolutely no sense to repair your printer if your printhead shows the same symptoms. From the start, I had already wasted 2 ink tanks on it by not seeing the problem right away (each tank costs ~$55). If you get this problem, you might as well say goodbye to your printer!

Finally, this problem appears to be a general one with all inkjet printers using pigmented inks, according to my contact at Atlex. The Epson 4900 is even worse, and the Epson 3880 seems to be relatively reliable. Canon printers have similar and other issues, but the printheads of those can be changed by the user, although they do not come cheap either. The technology behind the nanosized ink particles in all pigmented inks is amazing, but these  inks are prone to dry in the nozzles when the printer is not used at least once a week. This can irreversibly damage the print nozzles. For this reason, make sure to run a weekly printout through your printer to keep the heads clean and the cartridge tanks shaken, which avoids the pigmented inks from settling in.

With Christmas 2013 arriving at a precipitous pace, I am reflecting again on how all these beautiful pine trees will be cut in short order, tied by a restraining rope, and shipped unceremoniously hundreds or even thousands of miles to millions of homes. For a brief stolen moment, they will be warm, perhaps even sweating under the intense lights and heat of the holidays. But is this an end of life they were really meant for?

Our Christian tradition brings us many feelings of comfort at Christmas, in great part supported by the Christmas tree and its green and perennial symbolism. In my view however, there is also a dirty side to cutting the Christmas tree: it will die after a very brief length of its purported life. Is this really what nature intended? I am always amazed after the winter holidays to see the many dried up Christmas trees littering my neighborhood’s street. They lie there sometimes for several weeks until they are collected and discarded. The image below attempts to convey this sense of lost purpose. 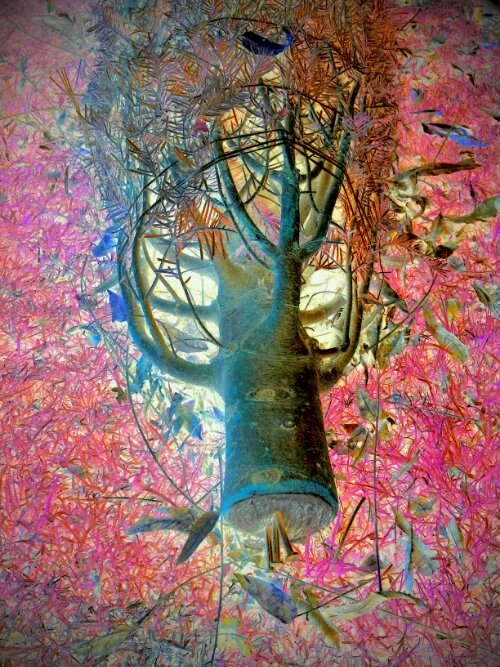 I hope that you, dear reader, will agree and find creative and great ways to express the joy of Christmas, for example nicely shown here. 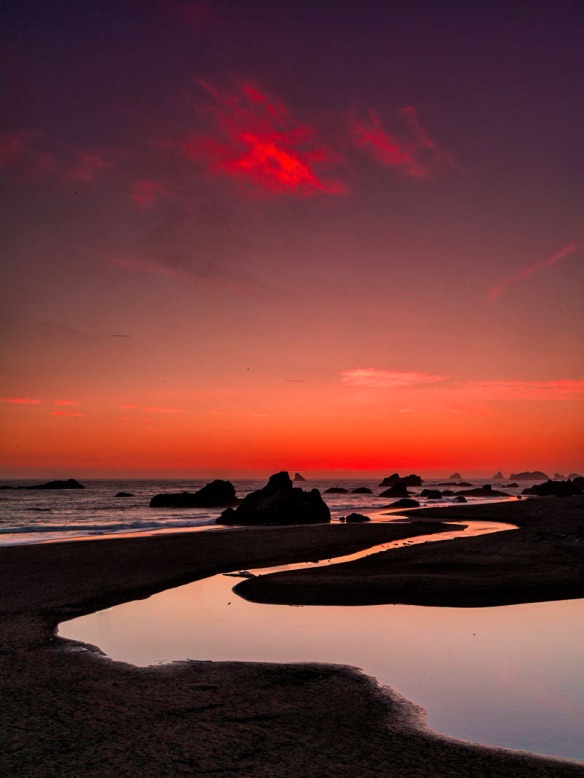 Harris Beach State Park was one of the most beautiful and unexpected spots during my recent trip in Oregon. If you are ever traveling to Northern California and the South Oregon Coast, make sure to stay in Brookings. They often enjoy temperatures 20 Fahrenheit higher than Crescent City, which is only 20 miles south, due to the highly localized Brookings Effect (similar to our Santa Ana winds in winter). It was close to 90 degrees Fahrenheit while I was there, even though the high in Crescent City was just 60 °F.

The S-shape of the small stream coming into the ocean in front of the numerous sea stacks at Harris Beach was a welcome foreground element. I saw most photographers present on that night taking pictures from the entry point of the stream at the beach level (and I cloned them out on this image). I believe that the higher vantage point was a plus for giving a structural element to this image. I had to combine two different exposures to adjust for the brighter sky, and also optimized the saturation and local contrast of the image with Topaz Adjust 5. 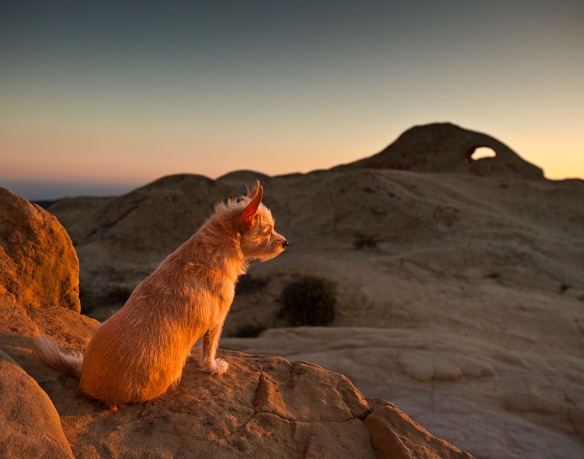 Photography is a passion that grew out of my interest in the arts and sciences. Both have combined into the digital medium that is befitting my personality, allowing a personal expression that is both enriching and educative. I find limitless sources of inspiration in meditative scenes through the beauty of nature and humanity.

I have had a lot of fun recently doing night photography. I became intrigued with the prospect of doing the classical car light trails, but using long exposures through an IR filter (Hoya R72 Infrared). At night, there are of course not many sources of scattered IR light, but I was curious about the results.

The images in my Los Angeles gallery on PBase speak for themselves. Interestingly, the results are somewhat soft, probably through diffusion of IR light, compared to the same view seen without an IR filter. This provides an ethereal feel to the image, which I like. I have not tried very long exposures yet (i.e. longer than the 30 seconds limit of my digital camera), but I will soon.

The only challenge with IR photography when using an IR filters in front of a lens is the need to prefocus without the filter on, and then make sure that screwing the filter back does not disturb the lens’ focus. I used Canon’s excellent 85 mm f/1.8 prime lens for this work (58 mm filter size), but any other lens would be fine. These filters can be expensive, so if you are trying this technique for the first time, it is a good idea to rent the filter, or purchase one of the smaller filter sizes like I did.

Note: If you arrive at this page directly from a web search, please see also my more recent adventure with the Epson 3880, which has given me the same exact problems.

I just found out that my Epson 3800 printhead is likely dead, once again, and I will need to get it repaired (not cheap, but still ~1/2 price from getting a new printer). Frankly, at this point buying a new machine is probably a better idea: it costs $650 for repair at Epson, versus $1300 for a new 3880. However, the repair doesn’t give a whole new set of ink cartridges, which run at about $550 by themselves…

Epson says that my printer problem is unusual, and that they have seen it only on a single other 3800 machine so far: my black ink (PK) tank emptys itself in less than a week, even without any printing. Not recognizing this problem right away, I went through several PK cartridges… To compound the problem, this issue is not showing up in the ink counter, which shows the cartridge to be nearly full!  I went through 3 PK ink tanks before really understanding the problem. There was no apparent leak anywhere in the printer or around it. In fact, the maintenance tank eventually also became full, demonstrating that the ink was somehow getting leaking through the nozzles (Epson said this is very odd and very unlikely). Thankfully, Epson replaced the “summarily” emptied ink tanks since I had luckily kept them: Epson was able to verify that the tanks are showing full with the electronic ink counters. In any case, prints coming out with this printer issue are too dark and have excess black ink drops depositing on the paper. Not good!!!

UPDATE:  The printer ended up going to an electronics recycling company. Thanks to the $400 Epson in effect last September, I was able to get a new Epson 3880 for $750. It has been printing like a champ since then, and I make sure to run at least a weekly printout through it to keep the heads clean and the cartridge tanks shaken to avoid settling in of the pigmented inks.

Here is a fun surfing event, the Surf Dog Surf-A-Thon in Del Mar.

The smiling gecko
Create a free website or blog at WordPress.com.